World-class specialists in the design and production of high-specification armored vehicles, US-based Jankel Tactical Systems (part of the global Jankel group of companies), has been awarded a Lifecycle Management Services (LMS) contract by the US DOD. This announcement coincides with the Association of the United States Army (AUSA) exhibition, the largest Land Warfare tradeshow in North America, taking place in Washington DC, 14-16 October 2019.

Jankel Tactical Systems is already well-established in North America. This latest contract, initially of a 12-month duration, will see Jankel delivering a service provision package in support of a wide range of non-standard tactical and armored military and civilian vehicles. Within the range of supported platforms will be Jankel’s own civilian armored vehicles (CAVs) and multiple other tactical wheeled vehicles and all-terrain vehicles (ATVs), operated by US DOD. The services delivered under this contract include development operator and maintainer training courses, maintenance management, repair services, spare parts, and a wide range of other assistance, supporting fleets from delivery through to disposal in remote and limited resource locations, worldwide.Enjoying a period of significant growth, Jankel’s core clients include the US Department of Defense; US Department of State; the Canadian Department of National Defense; and Global Affairs Canada.

In addition, Jankel has secured new customer opportunities with the US Customs and Border Patrol, US Marshalls, and the US Drug Enforcement Agency. This new LMS contract sees Jankel expand their existing LMS capability into a wider, more extensive vehicle service provision arena. Previously, Jankel’s focus in North America has been on ‘Hot Formed Armored’ discreet platforms and the delivery of niche armor requirements for platforms indigenous to the country within which they operate; including the Chevrolet 3500 HD Suburban, Toyota Land Cruiser 79 Series Double Cab (4×4 and 6×6) and Mercedes Sprinter 3500 XD. In addition to their wide range of vehicle protection capabilities, Jankel is targeting the provision of specialist seating and survivability systems.

Jankel sales programs increased significantly in 2018/19 with the provision of BLASTech Seating solutions for Mine-Resistant Ambush Protected (MRAP) and new production vehicles for the US and allied nations. Cody Baker, Chief Executive Officer (CEO) at Jankel Tactical Systems said: “winning this US DOD LMS contract is a key milestone for us, underlining our capability as a whole-vehicle, through-life engineering business, capable of designing, building and supporting defense and security platforms, worldwide”. He added: “what’s of particular note here is that in addition to supporting our own in-service vehicles, we’ll be supporting a wider range of other vehicles in a variety of locations; that’s a big step forward for us”. 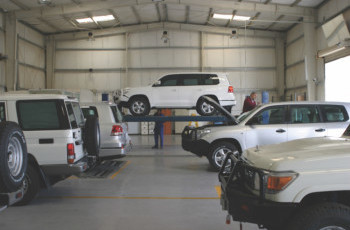