At its first public showing at Defence and Security Equipment International (DSEI) 2019, Jankel said little about its Light Tactical Transport Vehicle (LTTV), but the company recently revealed additional details of the product to Jane’s.

In March 2018 Jankel was awarded a contract to supply the Belgian Ministry of Defence (MoD) with 199 LTTVs, based on a Mercedes-Benz Unimog truck. Full-rate production is to commence in 2020, and actual deliveries are to run over a period of about nine months.

The LTTV shown at DSEI is now understood to be one of two Jankel-owned prototype/developmental vehicles, and while it is representative of the Belgian product, a Jankel spokesperson confirmed there are a number of detail and capability differences that could not be disclosed between the example shown at DSEI and the final Belgian vehicles.

The LTTV is based on a Unimog U5000 4×4, the chassis and automotives of which remain essentially stock. Jankel announced in September 2018 that it had achieved Direct Partnership certification from Mercedes-Benz, enabling Jankel to market, sell, and support modified Mercedes-Benz commercial off-the-shelf (COTS) chassis systems and enabling access to otherwise unavailable levels of technical information and support from Mercedes- Benz.

The cab and bodywork of the LTTV, while visually similar to that of the Unimog, have been purpose-designed by Jankel. For a variety of reasons – including logistics, support, training, and cost – standard Mercedes-Benz components are retained and used wherever possible.

The open cab of the LTTV is based on an armoured tub and can be fitted with waist-height armoured doors and a fold-down split front windscreen with armoured glass. According to Jankel, the armoured tub option was selected because this offers weight saving when compared with the appliqué armouring of standard cab components. Weight distribution was also improved, the company said. The vehicle is configured for left-hand drive but is available with right-hand drive as an option. For self-defence, the vehicle commander can be provided with a swing arm-type mount for a 5.56 mm or 7.62 mm light machine gun (MG).

Following its unveiling at DSEI 2019, Jankel has revealed details of the company’s LTTV to Jane’s (Shaun C Connors)

The rear body of the LTTV is based on a flexible ‘mission module’ concept that fits to the Unimog chassis via four standard ISO twist locks and includes forklift pockets. Jane’s sources suggest three distinct interchangeable modules are currently in-build for the LTTV (a troop carrying/special operations module, an ambulance module, and a load carrying module), with designs for additional modules being progressed for future opportunities.

The rear body of the LTTV is based around a flexible ‘mission module’ concept (Shaun C Connors)
According to Jane’s sources, the LTTV’s troop carrying/special operations module has an armoured floor as standard with options for removable side protection kits. The load bed is designed to be reconfigurable, with seating for four to six in Jankel lightweight troop transport seats that can be configured to face front, rear, or side. The module provides direct unobstructed access to the cab. A central ring mount offers 360° coverage and can accommodate weapons including light or heavy MGs or an automatic grenade launcher. A further light MG is mounted on the rear of the vehicle. Smoke grenade launchers can also be mounted on the rear of the body. Design options include a foldable rollover protective structure (ROPS) to enable vehicles to be transported by C-130 Hercules aircraft, and the source suggested this feature is included on Belgian modules.

The fully enclosed ambulance module is configured as standard for two attendants and two stretcher casualties. Access is via twin rear doors with a folding/removable ladder and a stretcher loading system. Internal noise level is below 85 dBA. A ballistic protection kit is available for the ambulance. The load carrying module consists of a baseline open design for general logistics/load transport requirements.

Jankel confirmed the outline weights and dimensions of the baseline LTTV, with troop carrying/special operations rear module, are 6.5×2.49×3.5 m (L×W×H). The chassis-cab with rear module interface weighs about 6,500 kg, with payload varying by variant and equipment fit. Payload (including protection) is about 3,000 kg.
The standard Unimog U5000 automotives consist of a Mercedes-Benz OM924LA 4.8-litre four-cylinder four-stroke diesel, rated at EURO 3 emissions compliance and fully low grade and jet fuel capable. Power output is 218hp (163 kW) at 2,200 rpm and 810 Nm torque at 1,200 rpm. A semi-automatic Mercedes-Benz gearbox with eight forward and six reverse gears is fitted, and a two-speed transfer case is integrated into the gearbox, giving a total of 16 forward and 12 reverse gears. The transfer case and coil-sprung Mercedes-Benz portal axle are fitted with driver-operated differential locks 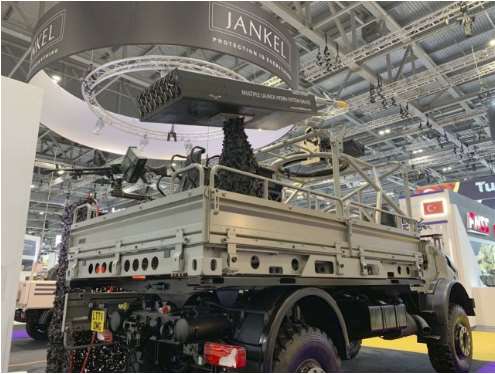 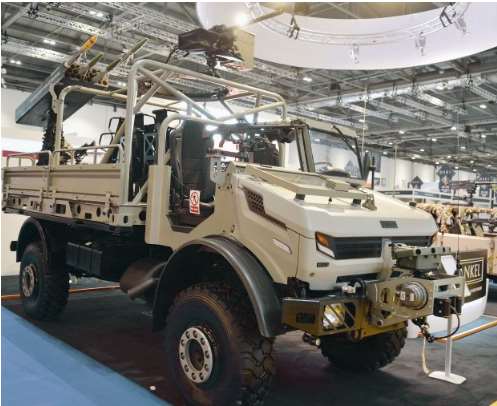 The LTTV is based on a Unimog U5000 4 x 4. The cassis and automotives are largely stock, but the cab and bodywork were purpose-designed by Jankel (Jankel)
In terms of mobility, the Jankel spokesperson confirmed the standard configuration LTTV for the most part mirrors the capabilities of the base Unimog and can climb a gradient of at least 60%, surmount a 300 mm vertical step, and ford 800 m of water without preparation. Approach and departure angles are 49° and 45° as standard, with the portal-type axles providing 476 mm ground clearance.

As previously reported by Jane’s, the Belgian LTTV requirement traces back to around early 2017 with the formal establishment of user requirements. Final approval for the requirement was announced in June 2017, and Jankel responded to the final request for information (RFI) in December 2017. It is believed that three bidders competed, with Jankel awarded the EUR63.3 million (USD69.8 million) contract in February 2018. The contract is understood to include 15 years of integrated logistic support by the company.

The actual 199-vehicle contract will include the delivery of 167 troop transport/special forces modules, 8 ambulance body modules, and 24 logistics modules, each incorporating a range of customer-specific features and equipment.

The Belgian LTTVs are to operate alongside 108 lighter Toyota Hilux-based Jankel Fox Rapid Response Vehicles (RRVs), the final 5 examples of which were delivered in late 2019. Jane’s sources said the LTTVs would supplement and then replace previous similar vehicles based on an older Unimog U1350L platform.
Jankel is now marketing the LTTV to other countries, predominantly those that already operate the Unimog platform. As a configurable platform, user options available can also include an 80 kN front- or rear-mounting electric self-recovery winch, blackout and/or infrared lighting, dual alternators, a cold weather package for operation down to -32°C, a hot weather transmission oil cooler (50°C), run-flat inserts, and a 14,000 kg towing capability. These are a mix of Mercedes-Benz or Jankel-designed options.
Comment
In addition to delivering the first LTTVs and final Fox RRVs, Jankel had a busy 2019. During the first three months of the year, the company announced ‘production ready’ status for the latest generation of the Hunter Tactical Intervention Vehicle (TIV), which will be built at Jordan Light Vehicle Manufacturing (JLVM) in Jordan. At the time of the announcement, Jankel revealed that the company had more than 350 TIVs in service across 11 countries in the Middle East and neighbouring regions. The company also made two US-related announcements: Jankel Tactical Systems was awarded contracts to supply armoured Chevrolet Suburbans and Toyota Land Cruisers to the US Marshals Service and the US Customs and Border Patrol, and was awarded three contracts to supply BLASTech mitigation seats to a US-based mine-resistant ambush-protected (MRAP) provider. The contract’s value is undisclosed but it is stated to be multi-million dollar.Your Content Goes Here 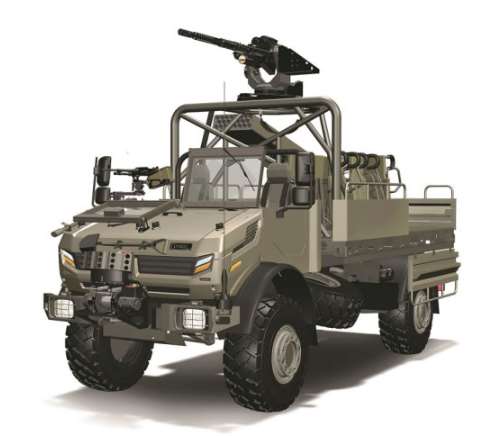